skip to main | skip to sidebar

I like the idea of a small pack on a larger pack I can just grab and head off with. Be it having to go for help because someone is hurt, be it getting out of the canoe to go and explore an area, be it hiking to a spot where I’ll set up a base camp and heading out from there to go and explore. Whatever the reasoning, if I have to be away from my main pack, I will want to have insulation, protection from the elements, some food, ﬁrst aid gear, water, maybe a few other odds and ends.

I talked here about my Kifaru E&E pack.
(I like it but....not sure that it really suits me perfectly. That typical Kifaru build quality means that it weighs about 900 grams, it’s only about three inches deep, which limits what can be put on the sides, and it’s meant to be carried on the back of a pack, which means the weight carried ends up being further out from the center of gravity.)

And here about the SOTech Go Bag.
(Wasn’t thrilled about the build quality, didn’t like how it carried, bit too big for what I had in mind for it.)

While out hiking I have time to think and dream and devise. I thought up a long, narrow pack, essentially a long box, carried under the top lid rather than attached to the back, and very simple, nothing fancy or elaborate, much lighter than the E&E. 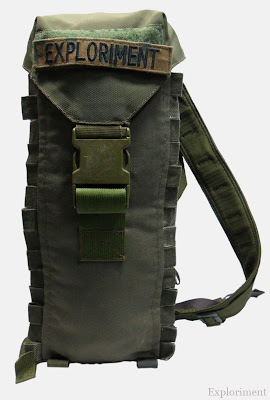 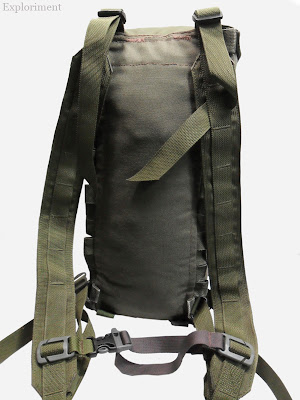 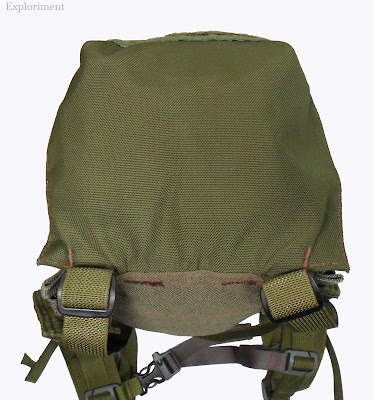 I knew that I would want to be able to carry both water and a ﬁrst aid kit as well. But I didn’t want to put those two items in the pack, but rather have them as separate components on the outside of the small pack. (You can see the two items a little further down in this post.) I took a different approach to attaching them. Rather than the usual PALS matrix, I chose to put tabs on the sides that I could use as attachment points. I call this Thomas’ Attachable Bag System, or TABS for short. 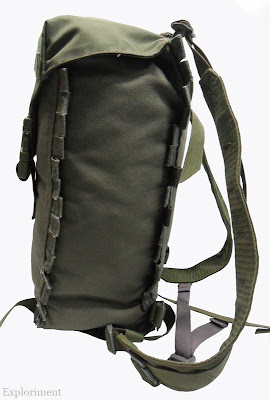 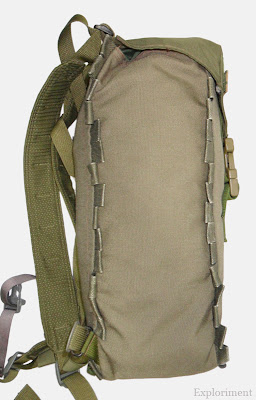 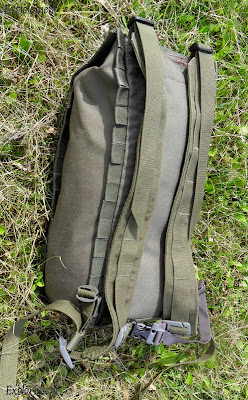 To make life a bit easier for myself I used some Emdom H2O Shoulder Straps I had. I wish they were a bit more contoured, but they’re nice despite that minor quibble and until I get around to  making my own straps, they will do just ﬁne. 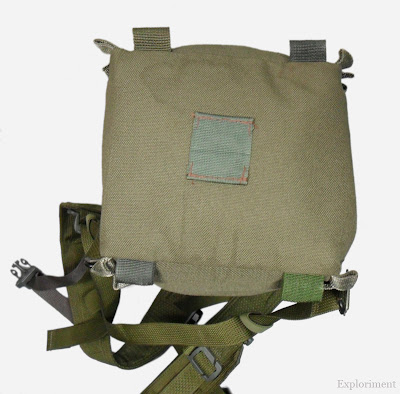 On the bottom I put a drain hole which was then covered by a piece of 2" webbing stitched at the corners. Lets water drain out if it should ever get in, but acts as a barrier to stem crud and critters from getting in.


I also put four tabs on the bottom with the idea that if, I should ever need to increase the volume I could attach a small Kifaru Pod to it. 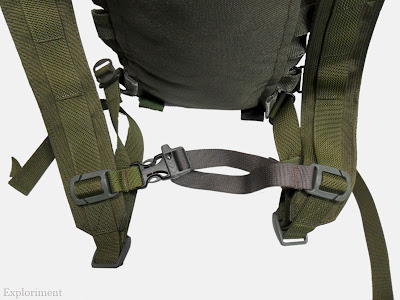 I replaced the sternum strap that came with the Emdom shoulder straps with an ITW-Nexus WhistleLoc. 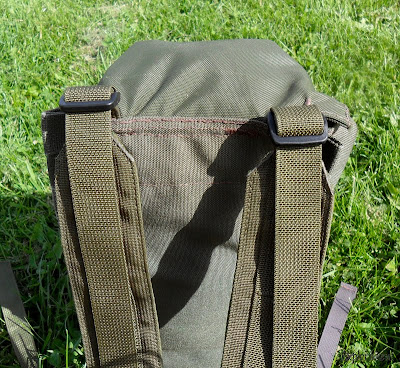 The shoulder straps attach at the top through tri-glides. 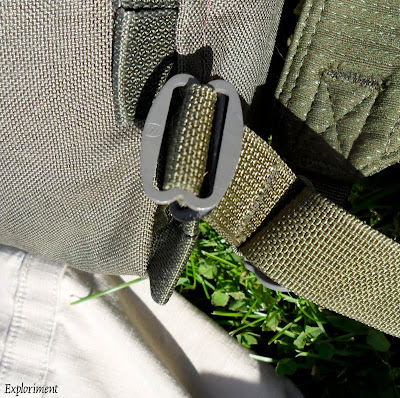 At the bottom of the straps the metal bar slider slips through a metal loop.


I thought of several different ways to close the top. A zipper going around the body, over the top of the body, two zippers down the sides like the SOTech Go Bag, even a roll top closure. In the end I opted for a flap and buckle closure. I have the sneaky suspicion that I will make more than one of these, simply to try out a few different approaches. 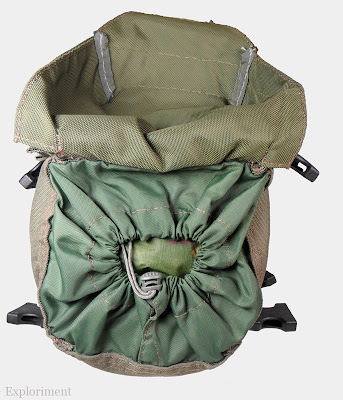 Underneath the flap I put a drawstring closure, made of lighter 420 denier packcloth, rather than the 1000 denier Cordura of the main body. 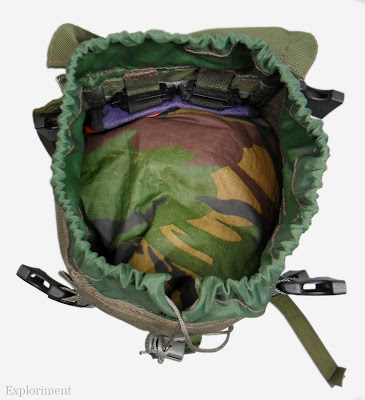 I did a rough calculation of the volume by taking the height and width and depth and multiplying them together, and I ended up with a bit over 9 liters. Using a more sophisticated formula of circumference being width plus depth times 2, divided by π, divide that sum by 2, which equals the radius. Then take π, multiply that by radius squared times height. Which got me a volume of about 11½ liters. A far more accurate means of measuring a packs volume is to ﬁll it with small beans or rice and measuring that in graduated measuring vessels. I’ll try and get around to that, but in the meantime that gives me a decent ball park ﬁgure of how much it holds. 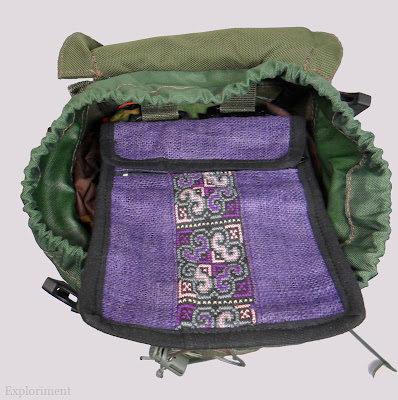 I wanted to put a small pouch down inside it, to hold small item. Water puriﬁcation tablets, cord, tinder, lighter, that sort of thing. Stuff like that is easy to lose when yanking everything out of the pack, so I would rather keep it contained in something. I was going to make a small pouch, but I had this laying around. (Can’t for the life of me even remember how I got it.) Purple hemp, nice embroidery pattern, perfect size. May make something else, but...this works. I just sewed two tabs along the back, and with a Siamese Slik-Clip, it attaches to two tabs on the inside back of the pack. 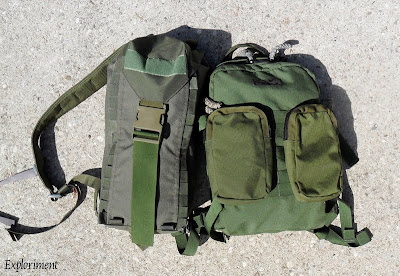 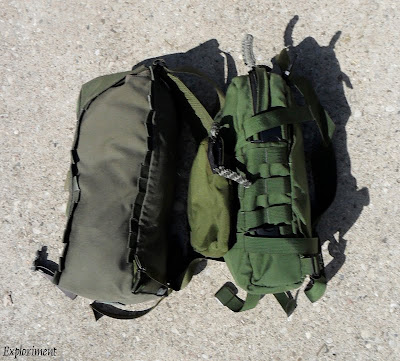 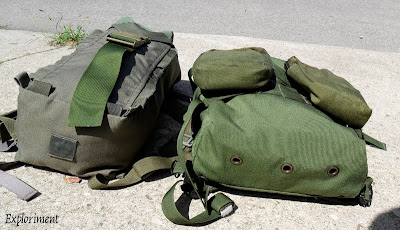 Here it is side by side with the afore-mentioned E&E. They’re roughly about the same size, just different dimensions, and the Escape’mups is less than half the weight of the E&E. 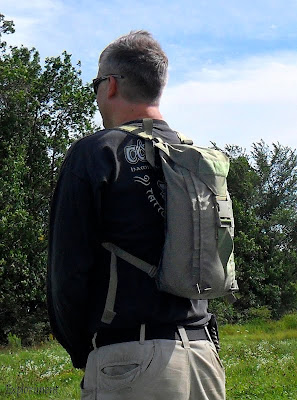 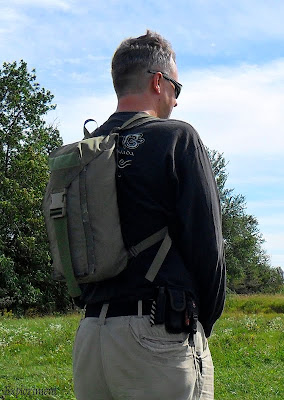 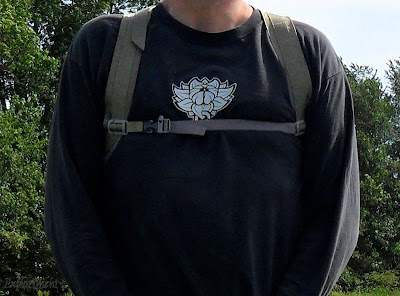 
Very happy with the way it turned out. Couple of very minor points that aren’t perfect, (the way the lid closes at the back, and I probably should have put a loop on either side of the bottom strap attachment point, rather than the one) but they’re not a deal breaker. Like I mentioned earlier, this is possibly the ﬁrst of two or three iterations. I’d like to make this out of still lighter material, and maybe get some DriLex to put along the back, try a different closure, etc. Another aspect of it is that this is the ﬁrst of what will end up being four components. How the other three interact with this component, may also dictate some changes. While the ideas are fully realized in my head and on paper, the proof is in the pudding. Ideas that seem plausible in theory, may not work out perfectly in practice, and may require some further tweaks or changes.

I’ve been wandering around with this on my back for a week, and so far it has proven to be very comfy to wear. 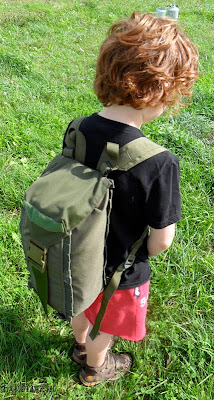 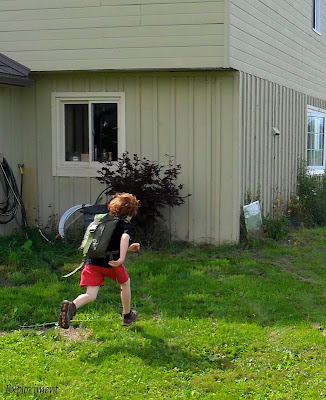 Hey! Where is that little brat going with my pack?!

(Originally I had called it the EscapePod. The name comes from watching Clone Wars with my nephew.
“That’s a pretty cool ship.”
“Nah, not really. It doesn’t have hyper drive, or blasters, or any escape pods.”
EscapePod. That’s it! The main pack is the MotherShip, and if I have to leave it, I take the EscapePod. Brilliant!
Star Wars. Inspiring on so many levels.) 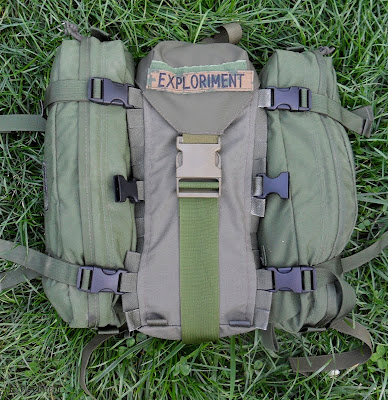 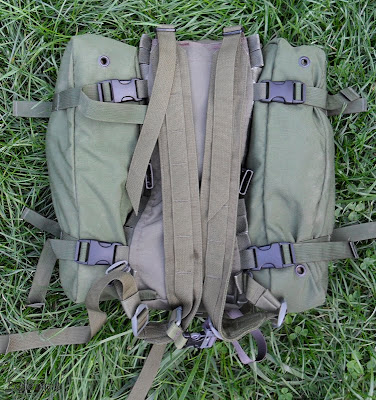 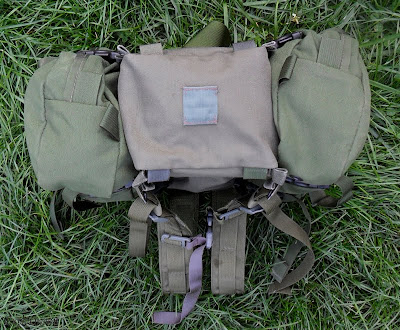 Here is the Escape’mups with two Kifaru LongPockets, docked and locked to the side. 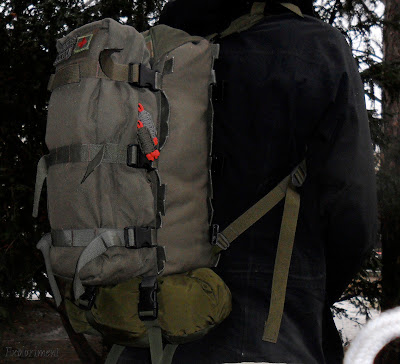 Here it is mounted with the Ouch’mups docked and locked to the face, and a Kifaru small Pod mounted to the bottom. 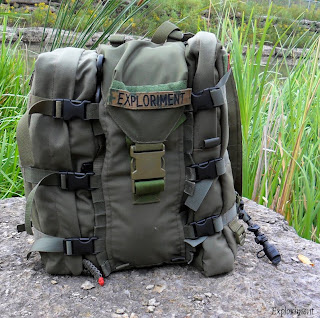 It was ultimately designed to be accompanied by several other purpose built components. The Escape’mups, Slurp’mups, and Ouch’mups all together. 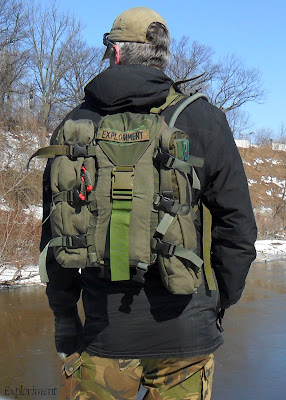 The fact that the Slurp’mups is an inch longer than the other two items bothers me a little. Not that much, but somehow the aesthetics of it are off a bit. Kind of silly, since this is ultimately meant to be a functional item, so how it looks is rather irrelevant, but I think the next iteration I may make the Escape’mups and the Ouch’mups an inch longer as well. 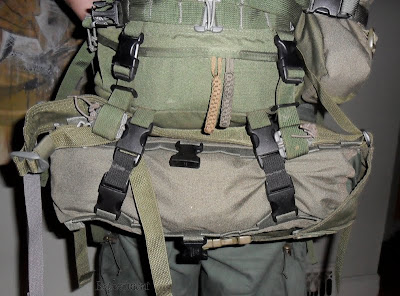 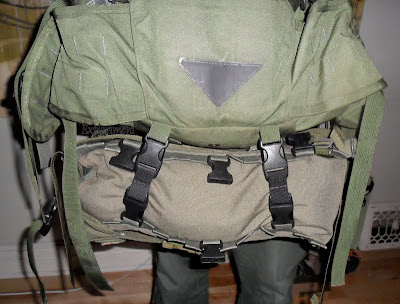 This is it clipped to the bottom of the Kifaru Express.
Posted by Exploriment at 11:42